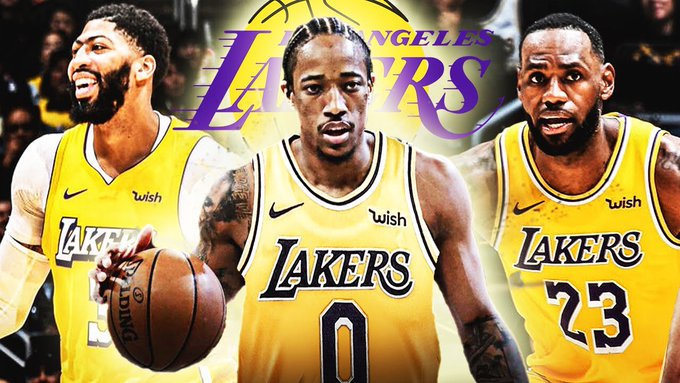 A report recently surfaced via Evan Massey of NBA Analysis that the Lakers are interested in DeMar DeRozan, whose contract with the Spurs is up and is set to become an unrestricted free agent in the coming weeks. DeRozan, 32, is from the LA area and played his college ball at USC, so you’d imagine he’d be very interested in the idea of playing for the Lakers.

However, due to salary cap constraints, the Lakers would have to execute a sign-and-trade in order to be able to afford him. They’d have to send San Antonio something like Kuzma, KCP, THT, possibly Trezz, and probably the 22nd overall pick in this year’s draft.

I’ve seen the idea of Kuzma, Trezz and the #22 pick for DeRozan floated as well. Trezz is an expiring contract, which is attractive to a team in a rebuild.

Look, if it’s “technically feasible” for the Lakers to trade for Damian Lillard or Russell Westbrook, then it’s definitely feasible to trade for DeMar DeRozan. The question is, would Gregg Popovich allow it to happen? We all know he despises the Lakers as a franchise, and it seems tough to imagine him doing anything that would help them get closer to a Championship.

It’s also tough to imagine Popovich wanting to be part of a full-scale rebuild of the Spurs at the age of 72, and that’s what trading DeRozan would mean. But the Spurs have also been pretty bad the past couple of years: 32-39 in 2020, and 33-39 in 2021. They’re going nowhere fast, and it feels like it’s time to blow it all up whether Pop wants to or not.

So I could definitely see San Antonio having some interest in a sign-and-trade if it nets them some good assets they can use as part of their rebuild. Kyle Kuzma has been erratic at best with the Lakers, but there’s also a history of the Lakers’ young players flourishing elsewhere: Brandon Ingram, Julius Randle, Lonzo Ball and D’Angelo Russell come to mind. I wouldn’t be surprised if Kyle Kuzma goes to the Spurs and turns into a really solid, consistent player for them. And THT is a good young player with loads of potential who I’m sure the Spurs could develop and build around.

In terms of the feasibility of the sign-and-trade, yeah, I could see it happening.

But would DeMar DeRozan actually fit in well on the Lakers, and specifically with LeBron? That’s the real question here. DeRozan would not be a perfect fit the way a guy like Dame Lillard would be. DeMar on the Lakers could work, but it could also be a bust.

People have kind of forgotten about DeRozan since he was sent off to San Antonio, but the dude can ball. The only real knock on his game is that he doesn’t shoot threes, but in a three-ball centric league, players like him tend to get overlooked. Yet he can create his own buckets–which is very hard to do in the NBA–he has a superb midrange game, and he’s excellent at getting to the rim. He would help ease the offensive burden for LeBron and AD, and be able to keep the offense going when LeBron and/or AD head to the bench for some rest–something the Lakers’ second unit could not do at all this past season.

Ideally for LeBron, he’d be surrounded by a bunch of “3 & D” guys in addition to a skilled big man like Anthony Davis. You want guys who can space out the floor and leave the lane clear for LeBron to get to the rim. DeRozan is not going to create a ton of space or hit threes, but he will command defenders’ attention and make it nearly impossible for teams to double LeBron or AD.

And hey: LeBron obviously worked beautifully with Dwyane Wade in Miami, and we all know Wade was not a three point shooter at all. In fact, Wade and DeRozan are very similar players in terms of their overall styles, strengths and weaknesses. Back in 2015, Wade himself even said about DeRozan, “He reminds me of me.” And DeRozan idolized Wade growing up. I wouldn’t call DeMar DeRozan a poor man’s Dwyane Wade because that’s disrespectful to DeRozan and how good he is; he’s more like a middle-class man’s Dwyane Wade. So there’s reason to believe LeBron and DeRozan would be be a good fit together.

But then again, the NBA has changed a lot since LeBron and Wade were teammates in Miami. It has been nearly a decade since they won their first championship together. Back then, you could get away with not shooting threes a lot more than you can today. And the Lakers truly do need shooters.

Still, DeMar DeRozan is a hell of a basketball player, even without the three point shooting. People forget, he averaged 27 points per game in 2017. He’s made deep playoff runs with the Raptors. He’s not just some dude who puts up big numbers on a bad team. He’s put up big numbers on good teams.

He’d definitely be the third option on the Lakers behind LeBron and AD, and it remains to be seen how his game would translate to that role. If you look back historically at third-options on LeBron-led teams, i.e. Kevin Love and Chris Bosh, they tend to get a lot of criticism and not a lot of recognition or respect. They’re asked to do the dirty work, the non-scoring stuff. Would DeRozan be okay with that? It’s hard to say. It would be understandable if he didn’t want to sign up for that, but then again he’d also get his best shot at an NBA Championship if he did.

And another point, as LeBron gets older and older, he’ll want to off-load more and more of the scoring to other guys, so maybe things could be different if DeRozan were to join the Lakers. I personally think LeBron should go back to playing point guard like he did in 2020 when the Lakers won it all; I thought their offense worked the best when he was the true point guard.

There’s only so many shots a team can take a night. When you have a Big Three, there’s always one guy who has to sacrifice and accept the fact that he will be the third scoring option. I think LeBron would be able to make it work, but the question is, will DeMar be able to accept his role on a team that already has LeBron and AD?

Beyond the matter of the on-court fit, DeMar DeRozan just deserves to get a crack at a Championship. This man was the heart and soul of the Raptors for nine long years, suffered numerous disappointing playoff losses to LeBron’s Cavs, and then the Raptors dumped him for Kawhi, who in turn led the Raptors to a Championship with DeRozan’s old team. He spoke candidly about it last year; this is a really good interview:

You really just feel for the guy, y’know? He loved Toronto, and Toronto loved him. He said he wanted to play his entire career there. He’s said getting drafted by the Raptors was the best thing that ever happened to him. And then to get traded and watch as your old teammates win a Championship without you? Just killer.

He deserves a shot at a ring. It would be a great story if he were to go back home to LA and win a Championship with the Lakers. As much as people hate LeBron and the Lakers in general, I think a lot of people would be rooting for DeMar DeRozan to get a ring after all he’s been through in his career.

Would it actually work in LA with LeBron and AD? I don’t know. My gut feeling is no, but then again, if he does land on the Lakers, then it means LeBron and AD will have probably signed off on the move, and that they believe they’d be able to make it work.