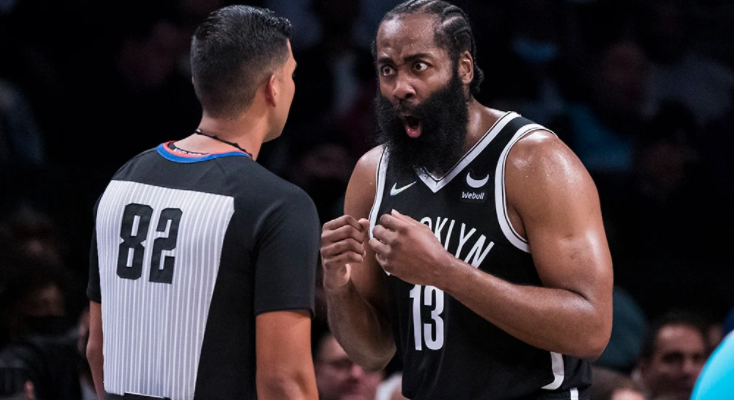 He’s also leading the league in missed shots and turnovers among qualified players–4.8 turnovers per game, and 6.0-16.5 from the field per game.

His effective field goal rate, which is what I like to use because it takes into account the fact that threes are worth more than twos, is an abysmal 43.9%. His career average eFG is 52.7%.

Clearly the new rule changes on “unnatural motions” have had an effect on his game.

They discussed the subject on First Things First:

While it’s worth noting that not everyone on the panel is saying that Harden is going to legitimately fall off due to the new rules, Kevin Wildes does point out that since Harden was traded to the Rockets in 2013, he’s drawn 484 fouls on three point shots, which is more than Dame and Steph combined.

Nick Wright thinks the rule changes are going to bump Harden down from a Superstar-level player down to an All Star-level player, and, most importantly, seriously lower the Nets’ ceiling as a team.

And that’s the real concern. This Nets superteam is predicated on the idea of KD being KD, Kyrie being Kyrie and Harden being Harden. KD is clearly still KD, we don’t need to worry about him. Kyrie, we don’t even know when we’ll see him play in the NBA again. And with the new rules, it’s up for debate whether Harden can still be Harden.

There is perhaps no other player in NBA history who has relied more on getting the whistle than James Harden. It’s a significant part of his game–or at least it was prior to this season.

When he’d drive into the rim and do that little scoop thing and always draw a foul, he’s not getting that anymore. Harden is a big part of the reason the NBA made these rule changes in the first place.

Since 2013, a full 8.8 of his 29.2 average points per game have come at the free throw line. And it’s impossible to count how many points he’s scored due to defenders playing him differently, knowing that he’s always looking to draw a foul and get to the line.

Now, it must be said that James Harden was dealing with a serious hamstring injury throughout the playoffs and over the summer, and he certainly may be still dealing with the lingering effects of that.

But it’s undeniable that James Harden relies heavily on getting to the free throw line.

You’d have to go back to 2014 to find the last season other than his trade/injury shortened 2021 campaign that Harden did not lead the league in free throw attempts. That year, Harden’s 665 free throws ranked 3rd behind KD’s 805 and Blake Griffin’s 674.

From 2015-2020, Harden led the NBA in free throw attempts every single season, and by a massive margin.

If we go back to 2013, Harden has shot a total of 6,707 free throw attempts excluding this season. That is way more than any other player in the NBA. For reference, here’s where other superstars are in relation to him:

Harden has almost 2,000 more free throws than the next closest guy, Russ.

Harden could literally not shoot a free throw for 3 full seasons and still probably have shot more free throws than any of these other guys since 2013.

He’s shot almost twice as many free throws as KD, Dame and AD.

Let’s take a look at free throws as a percentage of total points to really get a feel for the impact these new rules might have on Harden’s game:

But even as eye-opening as those numbers are, they really don’t tell the whole story. Because while every player in the league tries somewhat to get calls and get sent to the line, none of those guys are consistently trying to get to the line as much as James Harden is. Getting the whistle is a huge part of Harden’s game.

To really drive things home, I’ll pull up one final stat: in his entire career, James Harden has more free throws made than field goals made. True story. 6,585 made FTs, 6,537 made FGs.

Harden is the only one of those guys listed above who has more FTs than FGs.

This is a big deal.

Now, none of this is to say Harden is going to lose 30% of his points going forward or anything. It don’t think the effect will be that bad on him. But who knows?

We also know that he’s historically been less effective in the playoffs, and a lot of people theorize that it’s because the refs tend to “swallow the whistle” in the playoffs. Playoff basketball is a different game than regular season basketball.

These new rule changes will be even tougher on him than playoff “rules.” And then he’ll have to play in the playoffs with these new rules in place.

James Harden has never been a particularly efficient shooter. Again, he’s a career 44.4% field goal shooter and a career 36.3% from three. Those numbers are not great.

He’s able to score as much as he does because he has been reliably able to get to the free throw line.

Now, of course a lot of that had to do with him switching teams midseason and playing with KD and Kyrie in Brooklyn. He’s not asked to score 34 points every night in Brooklyn.

This season, with the rule changes regarding free throws, is really the first time we’ll be able to see Harden placed in a situation where he can’t reliably get to the free throw line.

It’s important to remember that his scoring was going to go down this season even if the league didn’t change the foul rules. He’s playing alongside KD, and presumably one day, Kyrie again.

In the small sample size we have right now (again, 4 games), he’s only averaging 3.0 free throw attempts per game. That is a significant drop-off even from his reduced free throw numbers in the 2021 season.

I also think Harden will revert back to the mean in terms of his shooting percentages. He’s way below his career averages in both field goal percentage and three point percentage. I mean the guy is only averaging 40% on 2-pointers right now. That’ll go up. His career average on 2s is 51.2%.

I seriously doubt he’ll continue shooting just 36.3% from the floor overall and stay at a 43.9% eFG rate.

But again, he’s never been a particularly efficient scorer in his career. He’s a volume shooter who gets to the line a ton. That’s his game. He’s not a sniper like Curry or KD or Dame.

Look, I’m not saying James Harden is about to be playing for the Shanghai Sharks next season. I’ve seen all the memes out there, though:

But let’s not forget that James Harden is still one of the elite passers and playmakers in the league.

It’s not like he’s going to be bad this season under the new rules.

I mean, come on: if he was only good because he got the whistle, then why wouldn’t other guys copy his strategy and average 34 points per game?

But I do think it’s possible that James Harden regresses quite a bit in this “new era” of NBA officiating.

He was always going to regress somewhat in terms of scoring because the Nets don’t need him to be a 34ppg scorer. That’s not the issue here.

The issue is whether or not he’ll be able to be as effective in his role as he was under the old rules. The Nets need something like 24-28 points a night out of him to go along with like 8-10 assists.

If/when Kyrie comes back, Brooklyn will need the same number of assists out of him, but fewer points: probably in the 22-25ppg.

Will he be able to score 24-28 points per game on way fewer shots (he used to average 20+ in Houston; with Brooklyn he’s averaging in the 16-17 range) and way fewer free throw attempts? I don’t know.

I don’t want to render a verdict after just 4 games. He’s said that he’s not fully confident in his hamstring yet. He’s going to get healthier and improve as the season goes on.

Yet, I keep going back to his shooting numbers: he’s never been a very efficient scorer. If you take away his free throws, how effective of a basketball player is he really? Obviously he’s not going to average 0 free throws a game now, he’s going to get to the line sometimes still. I’m just trying to separate his actual scoring ability and efficiency from his scoring done at the free throw line.

Just look at the guy: he’s 6′ 5″ and listed at 220lbs, he’s never been overly or freakishly athletic, or fast, or explosive. Sometimes he gets out of shape (and it looks that way right now). He’s not an elite shooter or an efficient scorer.

How is he going to score 24-25 points per game this season without the whistle? I’m genuinely asking, it’s not a rhetorical question. I’m sure he’ll be able to adjust his game somewhat.

But we really don’t know until we see this season play out.

Now of course, there’s always the possibility that the NBA softens its stance on these new rules and stops enforcing them as strictly down the road. Maybe Harden isn’t getting the calls now, but will start getting them more and more come February/March. I could totally see the league going soft as time passes. But again this is a wait-and-see situation.

Ultimately, it’s tough for me to envision James Harden just completely falling off because he’s no longer getting the whistle. That’s what my gut feeling here is. Plus, even if his scoring plummets, he’s still a really good passer and facilitator, so he has tons of value there still.

I think these rule changes will definitely affect him negatively, but they’re not going to ruin his career or anything.

It’ll definitely take time for him to adapt, and I don’t think he’ll ever be quite as effective as he was under the old rules. But he’s not going to “fall off” as if he got all his basketball powers stolen from him Space Jam-style.