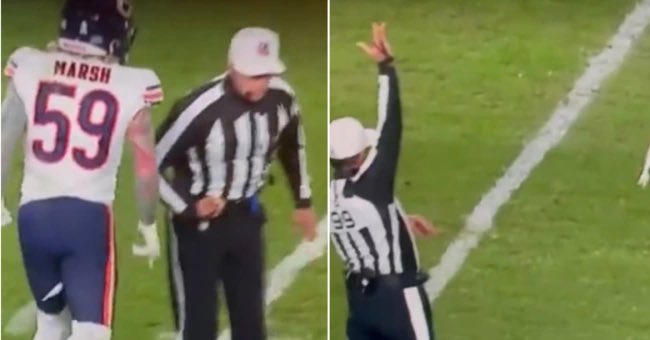 Yet again, another NFL game was upstaged by the referees, who seem determined to make this season all about themselves.

What on earth was this?

Obviously because the NFL sucks you’ll have to click the link to go to YouTube and watch the video of NFL head referee Tony Corrente literally hip-checking Bears linebacker Cassius Marsh and then flamboyantly throwing a flag up in the air.

The ESPN crew said Corrente was already reaching for the flag when he hip-checked Marsh, but it does not look that way in the video to me. It looks like Corrente pulled a James Harden, “drew the contact” and then flagged Marsh for the fake contact. He was “already reaching” for the yellow flag because he was planning on drawing contact with Marsh.

The call on the field was taunting, and at first it looked like it was because Marsh stared down the Steelers sideline (Marsh is a former Steeler) after sacking Big Ben on a critical third down late in the 4th quarter, or because of the little celebration kick/dance thing Marsh did, but as we can see Corrente doesn’t throw the taunting flag until Marsh was running back to the Bears sideline.

You can see Marsh tries to get out of the way, but Corrente was determined to draw the contact, and then he launches his flag in the air immediately after.

What the hell was that?

But instead the Steelers got 15 yards and an automatic first down. Pittsburgh ultimately got a field goal that made it 26-20, which then enabled them to kick the game-winning field goal with about 30 seconds remaining after the Bears drove down and scored a go-ahead TD to make it 27-26 with about 1:50 to play.

This ridiculous taunting call–whatever it was for–changed the game. It did.

Marsh commented on it afterwards:

“On my way to the sideline, I got hip-checked by the ref. It’s pretty clear,” Marsh said after the game. “If I was to do that to a ref or even touch a ref, we get kicked out of the game and possibly suspended and fined. I just think that that was incredibly inappropriate.”

“I think that one was just bad timing. It’s pretty clear to everybody who saw it that I wasn’t taunting,” Marsh said. “I’ve been doing the celebration my whole career. It’s just sad to see stuff like that happen in a close game like that.”

The hip-check was really bizarre. It really did look like Corrente was trying to find a reason to throw a flag on the play and give the Steelers a new set of downs. Of course Corrente denies it:

For his part, Corrente said the contact with Marsh played no role in the penalty.

“First of all, keep in mind that taunting is a point of emphasis this year,” Corrente said in a pool report. “And with that said, I saw the player, after he made a big play, run toward the bench area of the Pittsburgh Steelers and posture in such a way that I felt he was taunting them.

“I didn’t judge [the contact] as anything that I dealt with. That had nothing to do with it. It was the taunting aspect.”

Then why did you deliberately hip-check Marsh, Tony?

And as for the “posture” Marsh took, he literally just took a few steps toward the Steelers sideline and stared at them for several seconds. That’s it. He didn’t make any gesture or say anything at all.

But now apparently your “posture” can constitute taunting.

This was peak (or rock-bottom) “No Fun League.” The NFL has been ruined by the officials.

The Bears had a total of 12 penalties against them for 115 yards. Now of course some of those were self-inflicted, like Robert Quinn getting called twice for being offsides late in the 4th quarter. But even those, you have to ask yourself, why all the sudden would Robert Quinn not know where the line of scrimmage was and where he was supposed to line up? When they showed the replays, he was maybe a few inches over the line of scrimmage.

At first I was wondering, how can he be so dumb as to line up offsides twice? But then I started wondering if maybe that’s how he always lines up and the refs had in the past allowed him to get away with it, and then for whatever reason, the refs decided to start calling it as offsides during the most critical part of the game.

It seemed like the refs didn’t want the Bears to win that game. I’ll just say it.

The Bears outgained the Steelers 414 to 280, but the 115 penalty yards nearly made up that entire gap.

There was also a ridiculous call for a cut block that took a TD off the board for the Bears down near the goal line in the third quarter. Instead of a Bears TD, it was a 15 yard penalty and the Bears were forced to kick a field goal, a 4-point swing in the game.

If you thought the refs were the only bad thing about the game last night, think again.

The ESPN broadcast had a bone-headed moment as well. At one point in the game the commentators were talking about how Najee Harris was homeless for much of his childhood, and they said that when he got his full ride to Alabama, he slept on the floor of his dorm for several months because he was “used to sleeping on the floor” or something like that.

I didn’t think much of it at the time because obviously the game’s going on and you forget things quickly, but it was kind of a strange thing to hear.

After the game Najee Harris refuted the ESPN commentator’s claim:

So ESPN just made that up, then.

These guys just wouldn’t shut up about Najee Harris being homeless. They were talking about it for an extended period of time.

This is what ESPN does. They absolutely love to talk about tragedies and hardships these players have endured in their lives. Their draft coverage is all about hardships and tragedies in these players’ lives. College Game Day always runs at least 2-3 10-15 minute segments about how some player or coach in one of the highlighted games had to deal with death or cancer or something like that.

I guess ESPN is even making shit up now.

Now, all that said, the game wasn’t all bad. Justin Fields, outside of a shaky first quarter, looked great. This kid is improving by leaps and bounds, and I’m starting to see more and more of the guy I expected him to become in the NFL: because he has a cannon of an arm and runs a 4.4.

He finished the game 17-29 passing for 291 yards, 1 TD and 1 INT. The INT was kind of a fluky play early in the game, where it was batted at the line by Cam Heyward and went straight into Heyward’s arms. After that point, though, Fields was excellent. He also added 45 rushing yards.

Believe it or not, PFF graded Fields as the best QB in the league for week 9:

The best part was that Fields came up big in the clutch. With the Bears down 26-20 and needing a TD off a 2-minute drill, Fields hit Allen Robinson in stride for a 39-yard completion. Then he had a beautiful go-ahead TD pass to Darnell Mooney from 16-yards out. He rolled out of the pocket, adjusted his body angle and threw on the run, delivering a perfectly placed ball for the score.

It was a high-level throw. Not a lot of QBs can pull that off.

He had some beautiful dimes into tight windows consistently throughout the game, too. The kid clearly has a lot of confidence in his arm, and he should.

Now, that said, he did have some very risky throws in the game. He’s got to clean those up. And his running, while it’s a huge asset to the Bears offense, can be herky-jerky often. He needs to learn when and how to slide better. But I think that’ll come with time.

I really liked what I saw out of Fields in that game. The big moment was that late drive to take the lead. Fields stepped up in a major way and delivered for his team. That’s what you’re looking for out of QBs: can they lead those drives late in games when the pressure is the highest? Fields did it on the road against a tough Steelers defense.

Bears may not have gotten the win, but you have to feel good about Fields going forward.